World Food Championships CEO, Mike McCloud, along with Carl Lewis of Big Show Foods, joined us on Wednesdays show to announce that John Boy & Billys Grillin Sauce has been named the official BBQ Sauce for the WFC.

Details on how the sauce will be featured in the 7th Annual Ultimate Food Fight will be provided to competitors, later this summer.

Weve already got a few out there ideas rolling around on this one, commented McCloud. But one things for sure, its going to be fun, fun, fun!

Our own Carl the Cook has agreed to be a celebrity judge at this years World Food Championships Food Sport event, and the WFC will provide the Big Show with access to the WFC Champions and competitors, who are so passionate about cooking.

John Boy said I hear these folks are as nuts about cooking as race fans are about NASCAR!

If you missed the announcement on Weds show, heres a link to the segment, and the show wrap up.

The World Food Championships hosts the largest competition in Food Sport, where grand champions of previous events convene for a chance at winning the ultimate food crown and a share of hundreds of thousands of dollars in prize money.

Since its debut in 2012, WFC has given birth to 30 TV food stars, awarded more than $1.5 million in prize money, garnered more than 5.7 billion media impressions, and connected 150+ food brands with food fans, food bloggers, and food media.

NASCAR was blowing up into the mega-sport it is today. Dale had just started licensing his name and we simply couldn’t afford him. But, being the kind of people he was, instead of sending me to the pit with a flat tire, Dale told me about two guys from Charlotte named John Boy & Billy, and I was all ears. Back in his day my Daddy was a helluva baseball pitcher and even struck out Ted Williams once. He don’t get impressed often and Dale Earnhardt is one of a very few he’s ever admired, period. Dale was The Man. He was Racing. Daddy would say, “Son, you don’t demand it, you can’t fake it and nobody’s gonna give it to you. Respect. You earn it like Dale did.” I had never heard of John Boy & Billy so I listened to the Big Show and gave the Intimidator’s words the thought they deserved.

JohnBoy and Billy’s Hot & Spicy Grillin’ Sauce : This hotter version is great for ribs, chops, chicken, burgers, seafood, and much more. Nationally-syndicated radio hosts JohBoy and Billy have been working on their BBQ sauce for years – and here it is. Their own recipe brings out the best in ribs, chicken, burgers, chops, seafood, pizza and more – so get you some. Big taste from The Big Show… and if you see a goober, tell him we said DUH HUH. He’ll know what you mean.

Family & friends. For the Good Life. This is what Big Show Foods is all about. Carl the Cook’s mission is as simple as that.We hope folks will slow down, fire up the grill and spend quality time with those they love. So pop a bottle, fill your bellies and your hearts with the very best life has to offer. Spread the love. 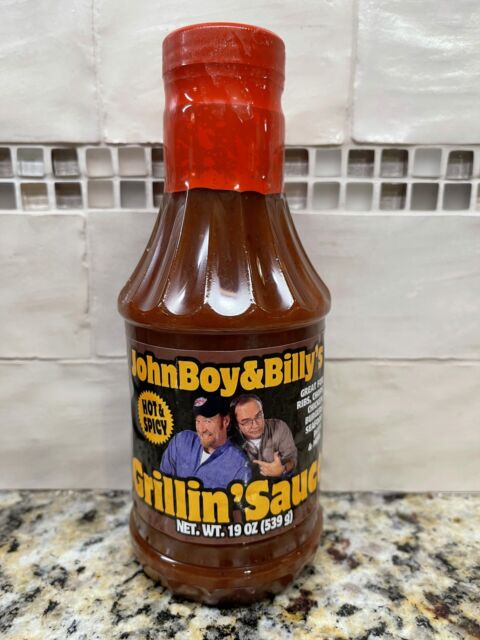 In 1996 Carl Lewis stole our hearts through our taste buds with his original John Boy & Billy’s Grillin’ Sauce. His regular appearances alongside radio hosts “John Boy & Billy” on their nationally syndicated “The Big Show” made him a fan favorite as Carl the Cook. No overnight success, this delicate recipe has been simmering in the heart of this Southern family for decades among the pines of eastern North Carolina. As of 2011, Carl’s line of Original BBQ & Hot Sauces and his blended rubs and seasonings continues to expand the same way this celebrity Grilling Master created them…by cooking and experimenting with family and friends at home, at church, on the road, in the backyard and at BBQ competitions across the country. But the sauce story started before Carl was even born, doing what it’s still doing today, putting a smile on a loved one’s face. In his own words, hailing from Turner Swamp, North Carolina, enjoy the tale of a true original, Carl “the Cook” Lewis.

You May Like: Does Oxiclean Remove Tomato Sauce Stains